In a moment, you’re going to learn how you can revolutionize your putting even if you can’t leave the living room.

But first, let’s touch base about the practice green…

Many times there aren’t enough holes cut into the practice greens to accommodate golfers, thus making short game training a hassle, especially when multiple golfers are hitting putts and chips to the same hole. Wouldn’t it be great to have your own hole every time you practice?

Or how about something that is EASY to set up in your own back yard or living room to quickly improve your pitching, chipping and putting?

Now you can have both with the Graves Golf Throw-A-Hole.

The speed the ball rolls on the green to the hole determines the best target line making it an important variable of great putting and chipping. The ideal speed of a ball will roll 12 to 18 inches past the hole if it misses.  This speed gives the ball the best opportunity to go in even if it hits the fringes of the hole.

With the Graves Golf Throw-A-Hole you can now take a hole with you every time you practice.  You can even use the Throw-A-Hole on the carpet inside your home, a great way to practice when you aren’t able to get to the course.

Shaving strokes in your spare time…

This is the ideal, low-cost aide that can have you beating your buddies even if they don’t see out at the range or the putting green. Yes, there are other indoor putting aides, but none are as easy to use and versatile as the GGA Throw-A-Hole.  Practice 3 putts during advertisements next time you’re in front of the tube and then slide them under a sofa. You’ll be improving your feel and line in no time.

Nothing to plug in or orient in the right direction. Something so quick to use and so easy to store, the Throw-A-Hole forces you to eliminate excuses for improving your game.

The Throw-A-Hole lets you find time to practice anytime! You can also toss a couple of these out if you’re waiting on a slow foursome ahead of you and want to get a feel for the fairway.

It is simple, but I have had it precision-designed to improve your game.

Plus…
You Get Our Comprehensive Short Game Training Program

Does not… require a great deal of natural athleticism.

Does not… require sniper-like hand/eye coordination.

Does not… require a healthy back, hips, shoulders and elbows.

Does not… require powerlifter-type strength.

In fact, chipping, pitching and putting can be mastered by anyone of any age, gender or physical aptitude.

Even a child can conquer the short game in short order

Just think about it: What do you think is easier to improve… increasing the club head speed of your drive by 5 to 10 miles-per-hour so you hit the ball an extra 20 or 30 yards… or… sinking a 5-foot putt?

Try and see for yourself.

But if you’re like most golfers, adding those extra yards off the tee will take a lot longer than learning how to chip or pitch the ball into “gimme” range. Then rolling the ball into the cup.

You can make up for a lot of mistakes with your wedge game alone.

Couple that with a decent putting stroke and your score has nowhere to go but down.

Here’s the bottom line: A complete golf game (one you can be proud of) requires a half-way decent long game… and… a short game that lets you put the ball in the cup.

The long game helps the short game for sure but…

The Short Game Makes The
Long Game Pay Off

Imagine how a player feels after hitting a bunch of greens in regulation. Pretty excited, right? The same player who just felt like he was on top of the world will… all of a sudden… feel like the world is on top of him if he can’t covert any birdies.

Due to a poor short game, when that same player misses any greens, he’s looking at one bogey after another.

The fact remains that most shots you play in a round of golf are less than a full swing. You know it’s true. The vast majority of shots consist of wedges, chips, pitches, bunker shots and putts.

Players with a sharp short game don’t have to panic if their drives don’t fly the length of the fairway. The long game does not have to decide what you make on any hole.

How do you take your short game to a better-than-average level? 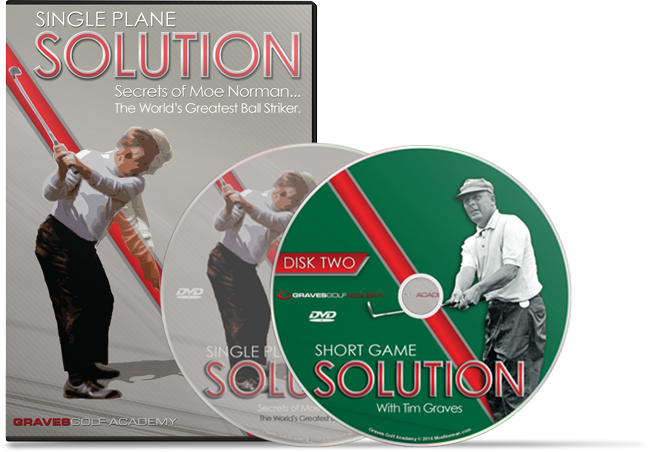 Tim Graves (a pro golfer for over 17 years with his most recent win at the 2011 South Central PGA Section Professional National Championship) shows you the secrets to a score-slashing short game.

Tim covers all of the essentials including:

Plus a lot more! Read what real students have written in to say…

“The short-game videos are very helpful… I am very excited to practice what your instructors have taught. Best wishes for success at your golf academy.”
— Ed W.

“…I just want to thank you, Tim and the rest of your staff for your commitment to making the game “easier” for us. The Graves approach works… Tell Tim I paid attention to him during our short game instruction… My short game is the cornerstone of any success I’ve enjoyed.”
— Lenny Molbert

“… Without a doubt your teaching methods work! Simple, to the point and I could put it to the test quickly… You sure make the game of golf more enjoyable and easier to understand and achieve. Thank you for such a great DVD.”
— Ed Harper Jr.

“4 to 5 Strokes Off Average Round”

“…By practicing my chipping using the checkpoints and the alignment board, I have seen 4 to 5 strokes come off my average round. And the putting drills are a great compliment to the chipping fundamentals…” — Norman Facter

“… my putting and chipping has improved beyond my expectations. Thanks,”
— Roy Ferguson

“…I did watch the bonus short game tips and today played my best game ever. I played the par 72 course at 77. This is with no birdies two sandy pars using your methods. One of the putting tips saved me from that end of the game changing. I remembered the idea of keeping my palm toward the whole and drained most puts after that…” — Bruce Mackay

And That’s Not All You’re Getting Today! The second video in the package covers…

The first video in the package focuses on teaching you the basics of a great short game. The second video is the all-time best-selling “Single Plane Solution” and is THE flagship training of the Single Plane Swing.

In this detailed video training, you’re going to learn:

This is the complete introduction to Moe Norman’s Single Plane Golf Swing. Nothing is held back. Swings are shown at various speeds with detailed graphics to break down every element.